Jesus on the Street 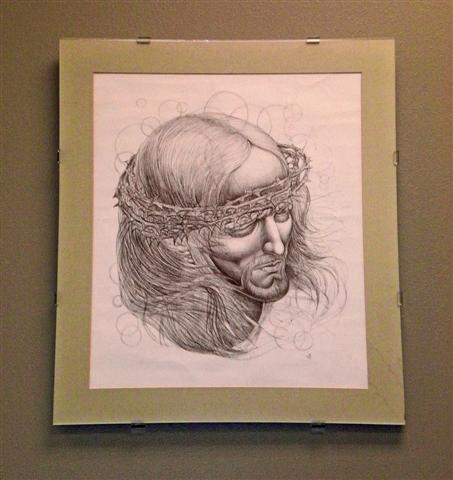 Of its origins, I’m not quite sure–some freak shop in Old Town, Chicago, circa 1968.  I remember being with my then-girlfriend on what was some kind magical mystery tour of the burgeoning counter-culture, a young Iowa Calvinist amid all the bell-bottoms in a tie-dyed world. What a trip. I have no idea what I paid for it.  In fact, that I bought it at all right back then seems strange, piety never having been one of my strong suits.

For decades, this swirling portrait of the Lord has been up on my office wall. Somewhere along the line, I had it neatly framed, and there it hung over a window.  No more. Now it’s here in the bedroom where we’re storing stuff, part of the mess in a house that’s slowly being emptied.

Not long ago, a student came by and eyed the walls of my office as if he were hunting for clues.  His eyes lit on that drawing above the window, and he winced, then pointed up at it–a smart kid, as I remember.  The identity of the “freak” in the frame entirely escaped him. I had to tell him it was Jesus. In a way, that episode was painful, not because the kid didn’t recognize Jesus–after all, I’m not sure any of us do. What made his blindness striking was that he couldn’t really recognize that Jesus, the freaky Jesus, the street Jesus, the power-to-the-people Jesus, the Sixties Jesus.

And I admit it: piety hasn’t kept that portrait on my wall for 30 years. That pencil drawing isn’t among the images I’ll keep because he is my savior.  I’m too much a Calvinist for that–I don’t always trust images. That sketch stayed up there for all those years because it was a Christ once upon a time I could get my mind and soul and experience around–and still do. In my mind, if he were to return today, I think he’d look a ton more like a freak than a CEO–well, like this, for example. 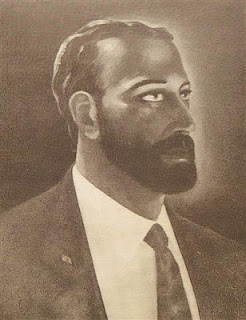 I think I can be forgiven for saying that the Christ on my wall is more of a symbol of my own cultural matrix than it is a source of my righteousness. For the historical record, the Jesus of my drawing is against the war.  He’s the one in that crowd of people, arms locked, crossing a Mississippi bridge. He’s the one begging justice to roll down, the one who inspired Thoreau and Gandhi. He’s the Christ the freak, the Jesus who made sense in my life almost a half-century ago when a ton of other such images had little currency whatsoever.

But he’s not Jesus Christ. I don’t think anybody really knows who he is.  When Peter grabbed the towel out of Jesus’s hands as he prepared to wash his disciples’ feet, what did Jesus say?  “If you don’t get this, Peter, you missed the boat entirely, the whole kingdom thing.”

Jesus is Lord of the street, but Lord of the board room too–or if he isn’t, we’re in trouble.  He’s a whole lot more than any of us can put on paper or on-line.

Still, this Old Town drawing of the Lord is staying with me until, sometime down the road, my kids pick it up, look at it the same strange way that student did, and then toss it, their father gone. It can’t be worth much, except to me.

Last night, I took Jesus down from the wall of my office, stuck him in the front seat of my car, and took him home because we’re moving. The whole event didn’t really hurt all that much because the way I figure–or the way the child in me figures–he’s not going anywhere he’s not been before.