Dick Clark–may he rest in peace 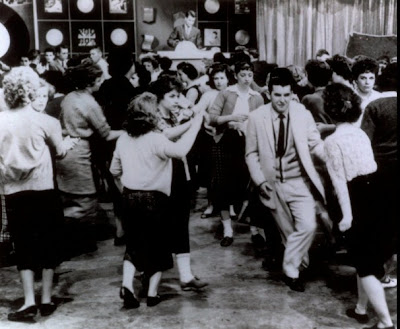 I was born in 1948, but it took me a while to understand the world into which I was, that year, so healthily delivered, or so my mother reports. I’m still learning. Twenty years before my first post-partum howl, the national synod of the Christian Reformed Church, the denomination to which I have been attached intimately, had decided its members really needed to be warned about what they called “worldly amusements”–dancing, card playing, and movie-going. I was blessed to be born into a home where such rules were adhered to, but not savagely. My parents didn’t wear jackboots.

My mother took me to Old Yeller when I was ten or so. I remember being in Sheboygan’s dimly-lit Rex Theater for the very first time, thinking we were somehow getting tested by a place somehow akin to the Devil’s lair. I was Young Goodman Brown long before I knew the name Hawthorne.  But Mom took us, along with her aunt. Couldn’t be all that sinful. Still, I remember the soft yellow lights on the walls barely denting the thick darkness that kept me close to her.

My sisters were older than I was.  Some weekends, when my parents were out of town, their high school friends–some of them in bright red-and-white letter jackets–would come over, stick a little doohickey on the turntable of the massive Magnavox stereo my parents had bought for the living room, and spin some 45s, dance music.  Once I remember my dad scolding my sisters for partying in our house, partying that he figured had to include so much dancing it pushed the nail heads out of the walls.  He was mad. Not about the nails.

My grandmother, who wasn’t CRC from birth like the rest of us, once told him, a preacher’s kid, that he should lighten up on the girls, let them have some fun.  They were kids, after all.  An admonition like that was probably hard for him to take; after all, which directive do you listen to?–a denominational warning against dancing or the Fifth Commandment, the only one with a promise.

By the time I got to high school, my sisters had mostly broken through those prohibitions.  I don’t remember my parents ever telling me that I couldn’t go to high school dances, but I do remember taking up that denominational directive myself, crusading, in my own way, against “the dance.”  It would be really interesting to go back there now and try to determine why I turned anti-, like a dutiful soldier in a uniform marked CRC.  Why did I take up the cudgel when, really, even in my family, the battle was o’er?   I don’t know, but I’d guess, knowing myself, there was more to it than deep piety.

I’m still CRC, but that’s a skirmish both of us backed out of long ago.

Yesterday, Dick Clark died, and the story was all over the news.  The man was a strange walking anachronism–always old, it seemed, yet never anything but young.  Over the years, he’s been an icon on New Years Eve, probably as good as a symbol as he was as a Times Square host, blessed as he was with some strange version of eternal youth.

Well, this morning, Dick Clark is gone.  He wasn’t as young as he seemed.

Laments and tributes were ubiquitous yesterday, but I found myself oddly cold.  I’ll always remember him best for American Bandstand, coming to us live from Philly, where a gaggle of teenagers hung around the edges of a dance floor while Dick Clark, who looked ever so much like them, stood up in front, introduced the bee-bop he was about to spin or else some doo-waap quartet right there on set, and then let the music play.

Those Philly kids would dance. I was ten, and watching American Bandstand was as sinful as watching anything at all on the Sabbath. Most afternoons, my mother was giving piano lessons a couple rooms away, I’m sure, or else I wouldn’t have seen it. To this day, when I think of American Bandstand, I think of something well, “worldly,” as was Dick Clark.  He was a soft-spoken man who didn’t think for a minute that dancing was downright dirty.  In my mind, even today, a day after his death, Dick Clark epitomizes worldliness, a really “worldly” man.

Those kids dancing like that?–it was amazing because it seemed they were actually having fun. Their parents had to know. They were on TV! Didn’t they care? 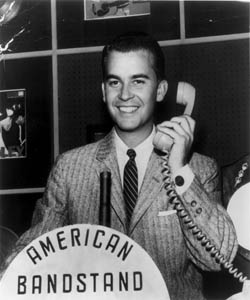 Dick Clark died yesterday at 82 years old, his death probably less shocking than his age. I still see him holding a mike in front of a bunch teenagers in dresses or suits and ties, bopping along to Buddy Holly or some other crooner, and I hear music that made my sisters’ friends dance, punching the nails right out of the walls of a living room my father had built with his own hands.

But I didn’t shed a tear for Dick Clark, whose brazen worldliness was astonishing to me when I was ten.  Even with all that sin in him and around him, the man was stunningly cool–and maybe that was part of it.  The Devil is the Devil, after all, seeking deftly whom he may devour. Poor Dick Clark was part of my sheltered boyhood, and he was almost always nowhere close to the paths of righteousness.

Yesterday people claimed he was, in all those years, a kind and gracious man. Despite my overly pious boyhood assessment, throughout his life Dick Clark didn’t really suffer a great deal.

And honestly, even when I think back on all that righteous silliness that was part of my childhood, neither did I.