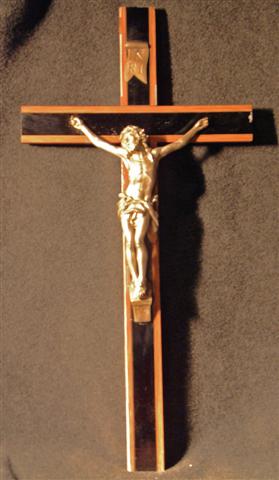 I envy monastics–sometimes. I envy their intent to zero in on the Christian faith, to delete every iota of worldly pain and pleasure from hearts and souls and minds. I envy that–sometimes.

Today is Good Friday. A big crucifix hangs on the wall above me, traditionally a Roman Catholic icon in that it includes, in molded pewter, the image of a suffering Jesus.  I like it.

My sister gave it to me after it was given to her from one of the old folks she visits weekly, a Catholic woman who had an apartment full of traditional iconography and thought it would be nice if my sister had this one from her collection.

To refuse the gift would have been shameful, she said, so she took it; but she had some trouble knowing exactly what to do with it because she was convinced it really wasn’t, well, for her, a lifelong Protestant. There’s nothing unbiblical about a suffering Jesus hanging from the cross, but somehow she had the uncomfortable feeling that a crucifix wasn’t exactly an orthodox part of her faith tradition or something.  We worship a risen savior, she might have said.

It’s not small, and somehow it’s presence made her uncomfortable.

She thought about tossing it, she said, but she simply couldn’t. How do you drop a crucifix in a garbage can with empty soup cans, crumpled milk cartons, banana peels and apple cores?   An old flag you fold and give to the Boy Scouts or something.  What on earth does someone do with a crucifix?

As an act of mercy, I told her I’d take it off her hands, and now it’s here up on my wall, even though it’s fair to say I’ve spent a good deal more time in Calvin’s Institutes than she has.

Today is Good Friday. Today, my wife and I will go to church at noon with about twenty others–no more–and listen to the story of the crucifixion. Last night, at a Maunday Thursday service, the crowd was sparse. Now I’m neither Isaiah or Chicken Little. On Sunday, at Easter, the place will be hopping, I’m sure.  Most people I know seem to prefer to worship a risen savior.

Still, there are times when I envy the monastics, who, yet today, do what they can to eschew the fixings of this world for communion with their eternal Lord.  They’re certainly more receptive to a suffering Jesus, a suffering Lord.  Sometimes, I admit, the world is too much with us. Sure is for me.

Our calender this year was off a bit–Good Friday and the first day of spring nearly a month apart.  What’s more, we’ve had June weather since mid-March.  Somehow, Good Friday ministers better in a cold hard drizzle, don’t you think?  An old friend once told me that here in northwest Iowa, we get only ten days a  year of good weather.  One of those good days shouldn’t be Good Friday.  The weatherman says it will be.

Christ’s suffering, celebrated here with my crucifix, shouldn’t be a pleasant thought.

And yet, I guess, it is. If he hadn’t suffered, if he hadn’t been nailed to that cross, if his hands hadn’t been butchered, his side sliced open, if he hadn’t died there, in mockery–if all of that hadn’t gone on he could not have buried our sins with him nor stepped from behind that monster stone, come Sunday, as if it were a paper weight. Had he not died, he could not have risen triumphant. We serve a risen savior.

But there would be no Easter story without Good Friday, and that reality is as good a reason as any for me to look up to that pewter Christ, his arms out, his thorn-crowned head sagging, as he hangs from the cross above me. That’s as good a reason to be happy today as yet another gorgeous moment in an early spring.

I walked outside just now to go to the gym. Up above me the face of full moon glowed in off-white gossamer, and the trill of a robin soared through the early morning darkness.

I envy monastics–sometimes. But then, we all serve a risen savior, and this Good Friday I’m still thankful that holy living can start with an old woman’s gift crucifix in a cold Midwestern basement–and probably doesn’t require a monastery. 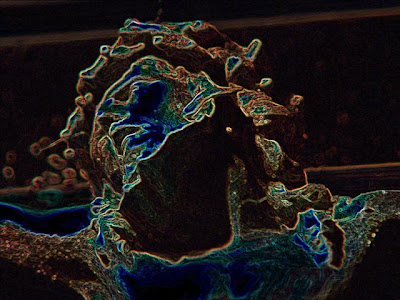