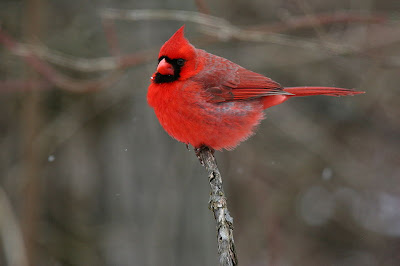 Our lindens are just about the tallest trees in town, I swear.  And there he was, high up top, singing his heart out, that searing melody so perfectly “cardinal” that it couldn’t be mistaken for anyone else’s.  Even with a horse of a lens, my camera couldn’t have caught him way up there because cardinals seem almost always nervous, flighty, jumping from skinny branch to skinny branch as if it were just ten minutes before the wedding.

Speaking of weddings, I haven’t see his mate around lately, and I’m starting to get worried, like Whitman did when the that visitor from the south, the mockingbird, lost its mate on some New Jersey shore.  Whitman turned his angst into a full-blown meditation on death (“Out of the Cradle, Endlessly Rocking”), an opera of arias that concludes with one of the least forgettable lines in all of American literature:  “Death, death, death, death, death.”  That’s right–five of them.  That’s the dramatic climax.  But then, the young Walt hadn’t really thought much about it before–death, that is–so he knew very well it was something worth repeating, I guess.  And about that he wasn’t wrong.

The longer this sometime neighbor of ours in his dressy red tux flits about in the upper echelons of our lindens, begging for attention with that unmistakable song, the longer I grew Whitman-like, for the cardinal had to be singing to his sweetie–most birds do, after all.  I’m not lying.  Most of the beautiful singing in the world is about sex.

But where was she?  I hadn’t seen her around for a long time.  In my mind, I started an elegy myself, maybe even understood Whitman’s gasping grief for the first time.  Broke me heart not to see her, made the song even more operatic, in fact.

I want to keep them around, those two.  I don’t want to share them with anyone.  I want them to be our cardinals, our backyard buddies, even though we’re selling the house.  In fact, when we move, I want them to come along.  They’re so bright and beautiful that I don’t want a morning to pass without them.

Anyway, he was still way up in the linden when I get on my bike and rode to school, two blocks away.  He hadn’t left, and I was feeling good about the way he was favoring our trees.  Maybe the two of them–when his wife returns–will nest somewhere in our backyard, I’m thinking.  We’d love a sweet pair of scarlet neighbors.

Now I’m not kidding about this.  When I got to school, his song was still unmistakably loud and clear.  Robins do miracles with their music, blackbirds I could do without, and blue jays, despite their bold backyard beauty, leave a gash in the air with their infernal scolding.  But cardinals sing songs that carry on forever it seems, as voluminous a song as anyone in the bird world.  I swear, as I parked my bike I still heard him.

But from two blocks away that song morphed into a sermon because its ability to carry reminded me that that redbird in the hoodie is really everybody’s prize.  That searing song soars for blocks.  We all love him, the whole neighborhood, and I’m a Silas Marner-type jerk, wanting him only for my own.

The devotions we read last night after dinner reminded us of sin, told us that none of us took it seriously, chided us for thinking more of ourselves than we should, lamented the wretched darkness of the human race–you know what I mean: one of those.  It was a meditation on a single petition of the Lord’s prayer–forgive us our sins–and it scolded us for thinking that our having to ask for daily forgiveness was somehow tedious. We think we don’t need forgiveness.  You know.  That was the message.

I admit it–I rolled my eyes.  I didn’t need some well-meaning pastor to hector me on a subject I know far too well, a subject perfectly clear to me just that afternoon when I got off my bike at school, the redeemed song of the cardinal still shimmering in the air two blocks from where he sang.  That blessed cardinal filled the pulpit all by himself, a true stemwinder.  I got the point the moment I heard him as I got off my bike.

He ain’t my cardinal, much as I’d like him to be.  He belongs to all of us, thank goodness, and it’s pitifully sinful of me to think he should just favor us by making his home only in our backyard.  I know my sin.

I admit it begrudgingly, but it’s true nonetheless–my thanks this morning are for that cardinal’s searingly beautiful sermon just yesterday afternoon.  You should have heard it.

Still, I’d like to tell him–and her, when she shows up–that the Schaaps do offer some great trees.