The hardest work I ever did was a three-week stint–that’s all–with a road crew cutting sod and laying it down along the new interstate highway, I-43, that would come to link Milwaukee and Green Bay, Wisconsin.  It was backbreaking work.  Cutting sod wasn’t all that bad–I was blessed to do that occasionally; but laying those sod balls just about killed me because hauling them up or down the steeply inclined overpasses in loose dirt was simply awful.

But that job offered, in my hometown, the best money that could be made by someone like me that summer.  I was a college grad without a full-time job; and the work was constant–six to six every day.  I was just a hired hand, local help, a big-shouldered body drawn from the neighborhood when the crew was prettifying that new highway with fresh grass in Sheboygan County.  When they were finished, the outfit asked me if I wanted to stay with them as they worked their way north, which pleased me as much as any compliment I’d ever had.  It meant they knew I could work.  That was July, 1970.

Nothing changed life in my hometown, Oostburg, Wisconsin, like that new highway.  What used to be a two-lane snaking path cut originally into the lakeside forests by Sauk Indians was suddenly transformed into an interstate that brought the city of Milwaukee fifteen minutes closer.   The old highway was a killer; the new one was a dream.  I had a hand in it myself.

In essence, it transformed Oostburg into suburbia at a time when the old way of life–agriculture–was becoming a business instead of a family thing.  That new highway brought hundreds of job to the community, many of whose residents became building contractors–plumbers, dry-wallers, carpenters, excavators.  The highway brought more than just traffic; it brought people and people needed houses.

For some reason, I remember that in my day the sign on the way up the hill into town said “Population 897.”  We were Hollanders, almost all of us anyway, as we had been since the 1850s, when great-great grandparents like mine left the Netherlands and whacked down some lakeshort forest to make room for a farm. For more than a century, if you weren’t Dutch, you weren’t much.

The highway changed all of that.  Today, even though my home town is significantly bigger and much more diverse, its peculiar charm is still unique.  It is, like most of rural America, deeply religious and gracious in the loving care it extends to its own.

For the most part, I haven’t lived there since that summer, the summer I laid sod down on the new highway overpasses, and it’s been a joy to watch the town change, be transformed.  When we pulled into town just after Christmas this year, we couldn’t miss an ice-skating pond right downtown, under lights, right there where my own grandfather’s blacksmith shop used to be, and later his Mobilgas station.  I thought it was a grand idea, befitting the best Oostburg ever offered its own.

Out along the old highway, maybe three miles north of town, in a brick building that I remember falling apart in the late 60s, a country school stands, a place that was probably built late in the game for all such enterprises, school consolidation going on already for years.  I remember it as the Town of Wilson school, but I’m not old enough to remember seeing any kids there.  By the time I was growing up, farm kids in the neighborhood were already being bussed off to town; and the place was, as I remember, falling apart.

It’s had lots of owners since then, I guess, although I don’t remember any of them.  But today the place is exceptionally well-kept, clean and tidy, immaculate–almost Dutch-like.  Dutch Bibles are the only ones, I’m told, that actually contain the verse “cleanliness is next to Godliness.”

Just across the road is the farmstead I remember belonging to the VerVeldes, a quiet and unassuming couple who went to our church and had a string of kids who all went to the Christian school in town when I did.  We’re talking agriculture circa 1950, of course, when Old McDonald farming was simply the way everyone did it–20 cows maybe, a hen house, and, at best, 160 acres and a big red barn with a loft stuffed with hay.

That’s long gone, as are the Les and Inez, I imagine, although they have kids in the area.  Things have changed.

Today the old Town of Wilson school is an Islamic Center, of all things–an Islamic Center.  It wasn’t an easy transition for the locals, which I can understand.  They made national news at just about the time another Islamic Center created all kinds of ill will right there close to the spot where the Twin Towers once stood.  Oostburg folks are just about as devout as they were when my great-grandparents, staunch Dutch Calvinists, shooed the Sauk and Kickapoo out of the neighborhood.   9/11 was horrifying, and it happened in New York, a long ways away.  But it’s always hard to know who’s one of us and who’s not when the battle lines, world-wide, seem so deep and bloody.

There was some significant opposition, but today that Islamic Center is there, amazingly.  If you stand in the parking lot, you can see the new highway a half-mile east, including an overpass whose grasses descend from sod I laid there myself. 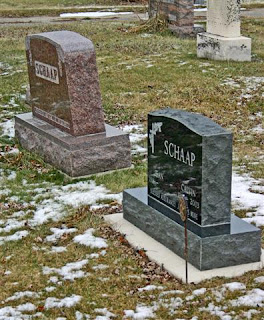 I really do love going home.  Something less a mile away from that new Islamic Center, in a cemetery named after my own great-uncle, in fact, lie the mortal remains of just about every ancestor of mine on both sides.  I bet you can see the place from the graveyard.  My grandpa’s there, a preacher.  I wonder what he thinks.

We live in a different world than the one I grew up in–all of us do.  But then nothing ever really stays the same, and nobody knows the future really, not even Harold Camping. What we do know is that it’s going to be different than it was because it always is.

Our preacher says those angels who appeared out of nowhere in the Judean hills, that strange heavenly choir, told those dusty shepherds something eternally profound.  “Don’t be afraid,” they said, although you must have been able to hear teeth chattering a half-dozen hilltops away.  “Fear not.”

Our preacher says that of all the many memorable commands in scripture, that’s the one most repeated–“Fear not!”

Even so, it’s terribly easy to forget.