My last dance with Ms. Emily

Professor Helen Vendler says that Emily Dickinson changed the first word of the fourth line the poem “Safe in their Alabaster Chambers” from “sleep” to “lie,” and she says so because she believes–and, on the face of the earth today, no one knows Ms. Emily better than Professor Vendler–that Dickinson wasn’t happy with “sleep” because that word felt too much like the apostle Paul, and she didn’t want her readers to misconstrue her deep pessimism about the resurrection of the body, her doubt. She wanted them to know she had no truck whatsoever with such a belief.

Here’s the poem–or the first stanza:

Safe in their Alabaster Chambers –
Untouched by Morning –
And untouched by noon –
Sleep the meek members of the Resurrection,
Rafter of Satin and Roof of Stone.

“Sleep,” Professor Vendler says, hints at something like being “asleep in the Lord.” It suggests that death isn’t final, that someday the dead will awaken in a glorious resurrection. Vendler says that from this forth forever more, this particular Dickinson poem, numbered 124, should always be published with “lie” where “sleep” is now because that’s the way Dickinson wanted the poem finally–you can check the manuscripts–and furthermore it’s what she believed.

Now, what goes on in anyone’s holy of holies, in one’s innermost soul, is a dance with God and faith no one else can ever know or mimic; that’s as true of Emily Dickinson as it is of Helen Vendler or James C. Schaap. Who can know, finally, what it was exactly–what “theology”–Emily Dickinson espoused on the day she died or, for that matter, the day she wrote this poem? No one.

A poem is not worthless in that search, of course. The eyes are the mirrors of the soul, some say, but a poem–or these words–can be too. But who can know what faith was or wasn’t there, or when what reads on the page is the whole truth? No one–no poet either–ever can say that today or yesterday he or she arrived at a full and complete revelation of what it is he or she accepts by faith. Seems to me we always know in part, and it seems to me the people not to trust are those who think they know it all. 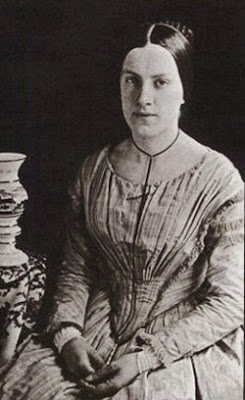 What Vendler argues isn’t silly. That first stanza seems a fairly tight argument for there never, ever being any resurrection. In their coffins (“rafter of Satin and Roof of Stone) the dead are without question dead-and-gone.

What once followed is a stanza that Dickinson abandoned, a stanza which documents the fact that, quite simply, life goes on in the cemetery. Nature really doesn’t give a hoot.

Light laughs the breeze
in her Castle above them –
Babbles the Bee in a stolid Ear,
Pipe the sweet Birds in ignorant cadence –
Ah, what sagacity perished there.

The birds sing, the breeze laughs, the bees babble, but the dead are surely and finally dead. There ain’t no life whatsover, and there certainly isn’t a resurrection.

Ms. Emily dumped that stanza, however, when her sister-in-law didn’t like it. Then, she added the one that ends most anthologized versions of the poem these days.

Ms. Emily isn’t always crystal clear, and she isn’t here either, especially those last lines. But I’m not about to dispute Professor Vendler. Seems to me Dickinson puts the pen to paper here because she wants to preach her doubt–“hearken! the dead are no more.” There’s going to be no happy day, no sudden end-of-time Fourth-of-July-like fireworks in your local graveyard sometime soon. It’s not going to happen, she says. Life goes on, and the dead stay dead.

So place that sharp stick in your eye, Christians–so saith Ms. Emily.

But then she never intended the poem to be published. Like a thousand other poems, she worked on it, worked it over, showed Susan, her sister-in-law, redid it once more and then put it in a chest somewhere. If she didn’t intend the sermon for an audience, is it a sermon? If a tree falls in the forest. . . and etc.  If it wasn’t intended for more, can it be simply what she was thinking on a particular day? Maybe.

Some of those who know better than Ido call Emily Dickinson the finest “Calvinist” poet. And I think I understand why. She doesn’t wear a badge, belong to any theological school, or preach T-U-L-I-P anywhere that I know of. She’s certainly not, by nature at least, an apologist.

What some say about her is what some say about Hawthorne and Melville and many other American Romantics who were themselves descended from a strictly Calvinist theology. Those folks could neither live with God nor live without him. They were caught, somehow, in a double bind, as unable to shake him as they were to accept him–always puzzled, always arguing, always protesting. Just never at peace.

Why would Ms. Emily rail about the resurrection of the body? Why would she spend her time writing a poem that took it on? Because He was there. Because He was something she couldn’t stop herself from thinking about. Not because resurrection of the body was true–she wouldn’t have said that, for sure; but because she couldn’t really bring herself to believe that He wasn’t. In that way, sometimes doubt shows more faith than full-throttled conviction.

Today we go after Ms. Dickinson for the last time in my teaching life. Today my job is to help my students see why this woman is considered the greatest poet of 19th century America, maybe the greatest American poet, period.

I teach young peeple who consider themselves Christian. That doesn’t change a thing. What I want them to see in Emily Dickinson is a woman of doubt who seemingly could never leave behind the woman of faith who never left a corner of her soul. Th
at strained tension created the art that Helen Vendler, herself not a Christian believer, so deeply appreciates.

Next year, in the massive culling of books I’ll have to do, Vendler’s Dickinson will come along, as will the full collection of the Belle of Amherst. She’s someone I’d love to read, stem to stern–every biography, every poem.

She’ll be a retirement project, a number on the jcs bucket list. I could do worse: “get to know Ms. Emily.”

If I can. If anyone can.